Understanding Whiplash Injury and Why Conservative Treatment in Littleton 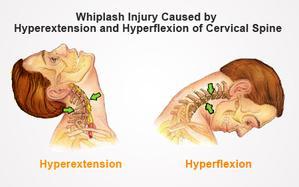 As much as a whiplash injury can fracture your bone, fractures resulting from a whiplash trauma are less common. A whiplash trauma mostly injures the joints around the neck. A joint is the point where two bones meet. Joints make it possible for bones to move easily with each other.

Ligaments hold bones together at a joint. In addition, they stop the bones from moving too far apart. When the bones move too far, injuries are inflicted on the ligaments. A ligament injury is referred to as a sprain. A whiplash injury causes the neck bones to move far apart causing a neck sprain.

Muscles usually cross the joints. They are responsible for generating the forced needed to move the bones at a joint. When the joint movement is too far, the ligaments and muscles also get injured. A muscle injury is referred to as a strain. A whiplash trauma can cause a sprain and a strain.

Majority of the bones in our bodies connect with each other via a single joint such as the knuckle in a finger. This is a joint that is held by ligaments and utilizing muscles for the movement of bones around the joints. One joint for all the bones in the spine would not be the best design since one joint would prevent the spine from having its required, stability, freedom of movement and strength.

It is important to note that the finger's knuckle joint moves in a single plane of motion, either backwards or forward. The same joint cannot move sideways. Additionally, the knuckle joints are not so strong since there is not much weight for them to bear. On the contrary, the spine is in a position to move in various directions. It can move backwards or forward, it can move on either side of your hands and it can turn right and left in a rotating motion. The spine is also responsible for the transmission of your head's, arms, chest and abdominal weight. Apart from all these tasks, the main function of the bones in the spine is offering protection to the spinal cord and nerves controlling the entire body's function. Nerves in the spine usually exit the spinal cord between joints of the spin bones.

The engineering marvel that makes it possible for our spines to bear such a great diversity in movement, enough strength to bear the body's weight and the responsibility to protect the spinal cord and its nerves it mainly because of the design of the spine bones, known as the vertebrae. The vertebrae usually has not one but three joints which are arranged in a triangular shape.

The enormous joint at the front part of the vertebrae is referred to as the disc. It is the joint whose primary responsibility is bearing all the body's weight.
The two joints located at the back of the vertebrae are known as facet joints. These are the joints responsible for controlling the direction in which the vertebrae moves. There are seven movable vertebrae on the neck, with the entire spine having twenty four. The spinal cord is located at the middle of the triangle formed by the three joints with the spinal nerves between the facet joints and disc joints.

Now you know what happens in a whiplash injury. The next question is "What to do after a car accident." The best advice is to make sure you get evaluated thoroughly and as quickly as possible after the car crash. It might not be appropriate to have -hands-on' care right after the injury but there are conservative pain relieving treatments that can be applied to ease pain and insure that your healing time is cut down and that you get back to normal as soon as possible.

*Always call your insurance agent after an accident to make them aware of what happened and how much damage occurred. if you think you may have sustained any injuries or not. In the majority of insurance plans in Colorado you will have $5,000 of medical coverage, commonly referred to as "med-pay' which will cover any out-of pocket expenses for your treatment. Our clinic has chiropractors that take insurance to cover your care.

More and more research is comin out that shows knee surgeries are not an effective procedure for knee pain with meniscus or osteoarthritic conditions.

Telehealth: The Advantages of Telemedicine

Struggles to get to the clinic? Trying to reduce your exposure to COVID-19, as well as other contagious illnesses, and still need to see your doctor? Telehealth is safe and easy — receive quality care from anywhere.

COMBINING TREATMENT WITH EXERCISE TO “RETRAIN THE BRAIN” TRIGENICS® is a neuro-kinetic, sensorimotor assessment, treatment and training system which instantly relieves pain and increases strength and movement.

Functional medicine is a drugless, non-pharmaceutical approach that seeks to addresses the underlying causes of ill-health and disease, using a systems-oriented approach and engaging both patient and practitioner in a therapeutic partnership...

In the U.S., more than 1,150,000 people go under the knife for spinal problems every year, a rate double that of most developed countries and five times that of the United Kingdom, says Richard A. Deyo, M.D., professor of evidence-based family medicine...

Concussions can also be described as a Traumatic Brain Injury , commonly known as TBI. Over 75% of all TBIs are mild, which means that there is only brief loss of consciousness or none at all. In most of these cases, the physical examination...